Titular
Penal
FAQ (when I first saw this term, I pronounced it in my head as two words, "Fa" and "Q". I don't think I've ever said it out loud)
Hoary
Bestiary
Sects
Crapulence
Shiitake
Ball Movement
Fug
Overread
Most of Ian Fleming's Bond Girl Names 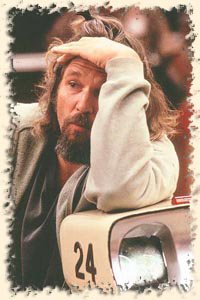 A year or so ago, University of Pittsburgh linguist Scott Kiesling published a paper breaking down the usage of “dude”. It was quite the topic in media for a week, then went away.
And now, a year later, I’m thinking about it again.

Probably because I'm reading Slam Dunks and No-Brainers: Language in Your Life, the Media, Business, Politics, And, Like, Whatever, in which Leslie Savan deconstructs "pop language" like "dude".

And because I say "dude".
A lot.
There are many contexts for the word, but I only really use it in one way. I draw it out.
Duuude.

Kiesling says “dude” can be:

My dude fits the surprise/disgust/exclamation category, I suppose. As in:

“I just got back from Grandma’s Boy. It was awesome!”
“Duuuuuude.”

Naturally, this got me thinking about how many U’s to actually put in the drawn-out “dude”. I just used six. Is that about right? One more, perhaps?

I went to Googlefight to see what others were up to.
Consensus: There is none. The folks at AP Style have definitely not weighed in on this one. Folks kind of just randomly lay on the U key. There is no standard here. 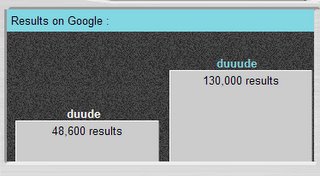 Beyond that, I find, as I add more and more U's to my search, that the number slowly trends downhill. At times, though, there's a jump up. For instance, there are 3,000 more duuuuuuuuuuudes than duuuuuuuuuudes.
There is a threshold, though. After 11 U's, there is a huge drop: 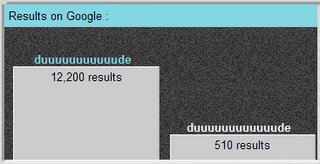 Then the number hovers around 500 or so, until finally, at 31 U’s (duuuuuuuuuuuuuuuuuuuuuuuuuuuuuuude), it drops to 217. It goes back up and down for awhile after that, then levels out to between 25-75 hits for dudes with between 40-60 U's. At 65 U’s, I’m down to two hits.
I'm gettin' down there now, I think. I add the extra U, and crap! 60 hits.
72 U’s is the first search to give me only one hit. It’s: http://www.quizilla.com/users/tailsfangirl/quizzes/Random

It reads, in part:

At 126 U’s, Google tells me to try a shorter word, it’s finished. It quits.
So, due to hitting the Googlewall, the winner is:
Killgore, in his(?) 2004.02.15 post on Poweranime.com. The complete transcript of the post follows:

The post seems to be part of a thread of folks trying to post the longest “Dude”.

In 1961, Barry Mann had a hit with a song that thanked doo-wop songwriters for their ability to set the mood for love:

Who Put the Bomp
by Barry Mann

Over the holiday, I helped my nephew load music onto his new iPod Shuffle. I previewed some of the music. I was shocked, I tell you, shocked to hear what the kids are listening to.

OK, not really shocked. But it put back into my brain again how much uninspired, purely-for-shock-value dreck is out there, in the mainstream. What would Mr. Mann pen today?

Who Put D*ck
by Barry Mann

I know I sound like a prude (which, I believe, is a rude prune).
But where is there any value in a young man shouting that he's going to "F a N up"?