Grab a Paddle and Hold On

A gusher of thoughts hit me in the shower this morning, and here they are, in order, before I forget them. Rarely do I take the time to trace my stream of consciousness, but since some of these thoughts were languagey I thought I'd let you all float down the stream with me.

stroke
Speaking of extraneous punctuation, CSI: is just silly. I know they do it because of CSI: Miami and CSI: New York and the upcoming CSI: Salt Lake City*. They think we somehow need remind that "hey! There are other CSIs out there!" But I don't get that from a colon at all. All I get is that you were about to add something, then stopped typing. It's more like CSI: oh, forget it.
stroke
Which makes me think of emoticons. The birthday of the emoticon was recently, and it got me thinking that I never have used one. Seriously. I never drew smileys in letters either or wrote "j/k" after a joke. I've always figures that either you get me, or not. Of course, I can be dry and sometimes my jests have been taken straight.
An emoticon could have changed the response to a note slipped surreptitiously to my (soon-to-be-canceled) date in 4th hour Algebra. Tell me if you see a difference:
#1. Maybe we could hit Pixie and try to get our names on the wall for eating 12 burgers.
#2. Maybe we could hit Pixie and try to get our names on the wall for eating 12 burgers. :)
stroke
For the record, my name's on the wall at Pixie in Mt. Pleasant. It's not under Eric "Babe" Morse, though. That's a pseudonym. Look for Chad Sanders. And it's for eight coneys, not 12 burgers.
stroke
In the eighth-grade spelling bee, the moderator asked us to spell pseudonym. But he pronounced it SUEDE-uh-Nimh. Like suede coat. We got it right, anyways.
stroke
A math teacher of mine had elbow patches the size of mouse pads.
stroke
Had a dream last night I became a 2nd-grade teacher. At the open house, I was 30 minutes late and there was a mob at my door. I tried to explain that I'd been caught in a freakish lightning storm, and trees were falling everywhere, but no one seemed to have noticed any storm. I told them I was very into active learning, and this made them happy, except for one lady, who said "Not a good first impression. That's strike one."

And that's the end of my shower. Eventually, all things merge into one. And a River Runs Through It.

But for six months or so, I've been listening to Tables and Chairs, a wonderful song from Andrew Bird. And every single time, every time, it makes me smile. It just played while I was grumpily sweating over a deadline, and I stopped, listened, and smiled.
I don't really take time to think what it's about. My take is it's a kind of post-apocalyptic future, which turns out kinda nice.

I know we're gonna meet someday in the crumbled financial institutions of this land
there will be tables and chairs
pony rides and dancing bears
there'll even be a band
'cause listen after the fall there'll be no more countries
no currencies at all
we're gonna live on our wits
throw away survival kits
trade butterfly knives for Adderal
and that's not all
woah!
there will be snacks, there will
there will be snacks!

It's the "there will be snacks" that I just adore. Such joy. The Adderal rhyme's fun, too. That is all. Support this man, if you find it groovy. I got this as a free iTunes Pepsi download... I think that means he still gets, like 25¢ or something.
Posted by Eric "Babe" Morse at 25.9.05 No comments:

This billboard greets commuters on our local freeway: 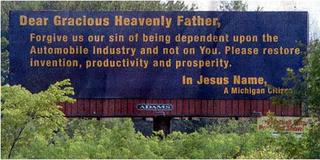 You can't read all of it as you drive by. You get about to "Heavenly Father" and you're by it. Apparently, these 'boards were put up by a Detroit-area businessman frustrated that he can't break through the lock the auto industry has on local commerce. At first, this makes one think of the "God Speaks" series, the white-on-black messages that God sent down to our billboards with messages like: "Don't make me come down there. -God"

But the God Speaks series was obviously meant to make us laugh, then maybe think for a second. And you could read them in three seconds. This guy asks God to "forgive us our sin of being dependent on the Auto Industry..." Hang on. [checks biblegateway.com]. Nope, no "auto industry" commandments that I know of.

OK, I get his point. And having the ability to drop $5,000 (a guess, probably low) on some pretty ugly billboards that you have to park to read is pretty cool.
But here's the thing:

In Jesus we trust, yes. In Jesus I find Peace, sure. "In Jesus name" is missing something. Something simple, something that people who will take checks for $5,000 should probably take a second to fix. Don't you think?
Posted by Eric "Babe" Morse at 19.9.05 7 comments:

In "Lisa's Rival", Lisa meets the new girl, who is younger and smarter than she. It's a beautiful look at the fun and frustrating sport of Anagramming.

Taylor: Hi, Lisa, I'm Alison's father, Professor Taylor. I've heard
great things about you.
Lisa: Oh, really? I --
Taylor: Oh, don't be modest. I'm glad we have someone who can join us
in our anagram game.
Alison: We take proper names and rearrange the letters to form a
description of that person.
Taylor: Like, er...oh, I don't know, uh...Alec Guinness.
Alison: [thinks] Genuine class.
Taylor: Ho ho, very good. All right, Lisa, um...Jeremy Irons.
Lisa: [looks with consternation] Jeremy's...iron.
Taylor: Mm hmm, well that's...very good...for a first try. You know
what? I have a ball. [pulls one from his pocket] Perhaps you'd
like to bounce it?

Anagrams go way the heck back. Like, B.C. back. Used to be, if you were clever with wordplay, you could be made a part of the King's Court. Kind of like the Anagrammatist Laureate. What a sweet job, sit around all day rearranging letters. Then, they invented television and we all stopped thinking. That's a shortened history, but the point is people don't delight in wordplay as much as they used to.

Which is too dang bad, because a) it's a brainstretch, which we all can use a little of and b) it makes me laugh.

Now, technically, an anagram is simply the letters of a word or phrase rearranged to create a different word or phrase. But the fun part is when you can make the rearrangement makes sense, and make it a particularly insightful reflection of the original word or phrase. This is the fine craft, and mystics, Kabbalists, and Will Shortz have long looked to anagrams for meaning and portent.

For instance, I can anagram Pamela Anderson into "Madonna's a leper", but it doesn't really make much sense. From Alyssa Milano, I can get "I am only a lass", which makes sense enough, but isn't terribly funny or insightful. Woody Allen to "A lewd loony" or "Wooed all NY", now that's good stuff. (All of these examples came from anagramgenius)

The internet (small "i", any objections?) has made anagrams rather fun again. Plug any word or phrase into an anagram server and get back thousands of options. Many make no sense, but it gives you somewhere to start.

So, you got one? Should it be a contest? Myself, I'd like to see what anagrams people could find of "staff meeting", "professional development", or "standardized testing". But that's just me. Share Your Ideas! Which may, of course, Assure Hairy Ode!
Posted by Eric "Babe" Morse at 13.9.05 3 comments:

"...died giving himself a sherry enema."

I yell into the room:

"Sherry Enema would be a great drag queen name!"

No response. I wish they still made Mystery Science Theatre 3000.

You Have Violated My Fragging Rights

In this post, I talked about a crazy headline that used one-word sentences to create a hip little slogan. Unfortunately, it didn't hold together gramatically. In my library today, there was a giant check from Wal-Mart®, like this one: There, on the check, is Wal-Mart®'s do-good slogan:

OK, now I get that they do "good works". And I even get that the act of doing good works out well in the end. Both of these meanings can be taken from the phrase. But what does the sentence "Good." mean? In the other example (Quality. Hometown. Care.), at least the three words were descriptors, and it kind of held together. This, I can't buy at all. To me, the sentence "Good." only works in this context:

SHE: I'm leaving, and never coming back!
HE: Good.

And the sentence "Works." just doesn't.

What is it with the sentence frag tag lines?* Do you have other examples? I know I've seen more...

Such simple words, fraught with such ambiguity.

Has the scheduled date of the sale been bumped up? To when? Have I missed it?
Is this a sale that moves about, like a Progressive Supper?
Will the emotional impact of the sale be so moving that I may be transformed? Am I up to this?

Or is it that someone is moving. And having a sale. And it's up there a ways. And that I felt I didn't have the time for a more thoughtful post, and I mailed this in.