Nothin' But A G* Thang

We are supposed to be the people folks look to for nuggets of languagey goodness. We need to be examples to the teeming masses yearning to speak well. But lately, we've been really steppin' in it.

To wit:
You will not find dipthong in the Victoria's Secret catalog.

Recently, it has been brought to the attention of The SPASTIC Usage Dept. that certain words and phrases are being used incorrectly. Here's the thing: it's fun to pepper our speech with fun words. Just double-check if unsure of its use. If we all work together on this, we can begin to create a new usage paradigm.

To wit:
Teutonic is not a drink.
It also does not mean hair gel abuse.

Recently, it has been brought to the attention of The SPASTIC Usage Dept. that certain words and phrases are being bandied about with reckless, um, ambandon (note to self: check root of "bandy" and "abandon". Connection?).

Just because the word sounds right, there's a chance you're a bit off.

To wit:
Canonical does not concern things related to cannons.
It also does not mean having to do with cameras.

Should I Expect More From A Place That Can't Figure Out How To Make A Round Hamburger Patty?

To Do Is To Be.
-Neitszche
To Be Is To Do
-Kant
Do Be Do Be Do
-Sinatra

Just Do It.
-Nike adman

Daddy didn't do her.
-Some doctor on House.

Duuude...
Sean Penn, before he lost his sense of humor

Do.
It connotes action and forward movement. As a verb meaning "engage in", the word is usually followed by a noun or pronoun object, telling us what it is, exactly, that is about to be done.
As in:

1: Well, I'm off to do my taxes at the place where the lady dresses up like Uncle Sam and stands out by the street in the cold wearing a sandwich board and smoking!

2: Can you do this for me? The problem with sticky traps is that when mice get caught, they are inconveniently alive, and still must be murdered!

Wendy's has recently been flipping how we do "do". They've taken a page from Burger King's Packaging Playbook and put writing all over the stuff holding their food.
My recent Diet Dew did this Do:

DO fresh long after most places have put fresh to bed.

It goes on from there about how nice it is that they're open late with tasty fare.
At the bottom of the paragraph is their tagline:
DO WHAT TASTES RIGHT™

Text continues on other containers, as well.
On my chili, I'm told to:
DO slow-simmered.

So, it's "Do Adjective". Except when it's not.
Their website tells me to
DO a real hamburger.

Not an adjective, but still doesn't line up with our understanding of what do does. This, in fact, is more the usage of "do" in "do her", which, IMHO and ITOODAW*, I would consider slang. And, this makes the image of one doing a hamburger more American Pie than Wendy's may wish.

Of course, picking on advertisers for using slang is like picking on Jessica Simpson for being an airhead.**

But, still. If we don't make a stand, and say Hey! What are you up to, here, Buddy? aren't we saying to our kids that you can Do This when This = Any Old Word You Dang Well Please? Well, put me on the record as having Spoken. FWIW.

This is reminiscent of the dust-up over Apple computer's "Think Different" campaign, where folks were upset over their apparent ignoring of adverbian codes. They claimed they were doing differently, using "different" as a state of mind. Like, Think Pink. Or, Think Spring. According to spinsters,*** it's actually "Think [thoughts that are] Different." Whether or not you saw it as another example of style as an excuse to confuse gradeschoolers and ESL students, the hubbub on that one died pretty quick.

And the hubbub on this one? It's pretty much just me. And, actually, I'm already tired of talking about it.

This observation from guest columnist ACoolKid:

Spotted on a file cabinet near the Reinsurance department:

"Please be considerate of those around you when
using these cabinets for the noise level."
-Thank You

I had never considered using cabinets for the noise level.
But once you get started, the possibilities are endless!

I'm thinking about going all STOMP! on 'em. I think
they'd appreciate my consideration.
Posted by Eric "Babe" Morse at 20.2.06 1 comment:

Maybe I'm just way off, here. In the past, I've talked about how nonparallel structure in ad fragments annoys me ((I wanted these little tagline snippets to be called frag tags. It didn't catch on). This is probably a petty peeve. It's not even breaking any real rule, as far as I know. It just sounds bad to me.

Ads for The Amazing Race shout this at me:

Does this bug anyone?

Exotic, amazing, adjectives. Adventure, noun.
When I hear the hardcore voice-over guy trying to get my adrenaline pumping, my brain stops to think more adventure? Don't they mean adventurous? and I don't think they want me stopping to think.

It's probably just me.

Wendy's is doing it, too. It was bugging me yesterday as I read my cup, but now I can't remember what it said. I'll have to score a Diet Dew tomorrow and update the post with their vexing verbiage.
Posted by Eric "Babe" Morse at 16.2.06 4 comments:

Pining for the Ford

Lisa Loeb told me that I say she only hears what she wants to.
Well, Lisa, to my ownself I must be true.

Because I'm in classic only-hear-what-I-want-to mode.

"What we essentially have here is an old-fashioned, not always convincing B picture with A-list stars."
"A passable distraction. Nothing more."
"As we watch Ford reprise his trademark mannerisms, we no longer enjoy the ring of familiarity. We just hear the tolling of a bell -- Ford's."
"Harrison Ford needs a better agent."

Yes! Royally entertained! A-list stars! Passable distraction!
I am so there.
Posted by Eric "Babe" Morse at 13.2.06 2 comments: 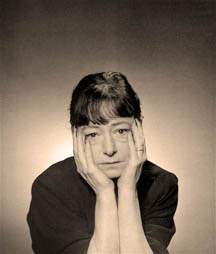 If you want to know what God thinks of money, just look at the people he gave it to.
-Dorothy Parker

Dorothy Parker's birthday Jan. 22 gave me reason to reflect again on what many see as a profound loss of intelligence and wit in our popular culture. We could try to dissect this thesis, argue as to its causes, or nominate worthy heirs to the modern Throne of Wit (can I get a Steve Martin? A Woody Allen?), but I don't have any real opinion... I just know that when I hear people from Days Gone By talk, they sound more intelligent, more fun to hang with.

We are definitely living in a different age. Video games get much of the blame for the dulling of our edges, and I tend to hang with this idea. I can think of many a time when I could have:

and chosen, you guessed it:

Where are the Twains (To create man was a quaint and original idea, but to add the sheep was tautology.), the Grouchos (I've had a perfectly wonderful evening. But this wasn't it.), the Menckens (After all, all [Shakespeare] did was string together a lot of old, well-known quotations.)?

To encapsulate a person's lifetime of thinking into a pithy quote is overly simplistic, yes. But that the thinkers of the Algonquin Round Table and others of generations past can generate so many quotable quotes has to be worth something. Who do we look to for insight? In 50 years will we be looking back at our era and quoting the Sandlers (You eat pieces of s*** for breakfast?), the Pitts (Being married means I can break wind and eat ice cream in bed), the Cruises (I want a world without war, a world without insanity. I want to see people do well)?

I realize looking to pop culture stars for wisdom isn't quite a fair comparison... if wisdom-seekers from the future only took lines from Golden Age actors, the fare may not be much better. But a quick look at Bette Davis (Why am I so good at playing bitches? I think it's because I'm not a bitch. Maybe that's why Miss Crawford always plays ladies.) and Humphrey Bogart (Things are never so bad they can't be made worse.) show a couple folks who thought before they spoke.

Maybe I just don't pay attention to current talkers. I'm sure what I long for is still out there. William Safire (Is sloppiness in speech caused by ignorance or apathy? I don't know and I don't care.) has got some stuff to say. So does Anna Quindlen (I would be most content if my children grew up to be the kind of people who think decorating consists mostly of building enough bookshelves.). Will it hold up 50 years from now?

I'm sure future generations will look to the collected wisdom of many contemporary authors. But we need only return to Ms. Parker to be reminded of what a deft wit truly sounds like:

I might repeat to myself slowly and soothingly, a list of quotations beautiful from minds profound -- if I can remember any of the damn things.
Posted by Eric "Babe" Morse at 1.2.06 4 comments: