Christmas Reflections IV:
Thanks for Comin' Round 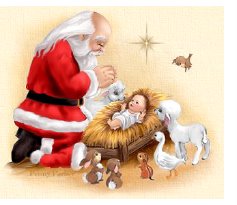 A few places in blogville (I like this better than "blogsphere"... it's more homey) have been discussing the Christmas X, and its historical place in X-Mas. I'd known for years that it wasn't meant as a slight, but the background is quite interesting.

I never get too hung up on the semantics of the Season. Not like our state Senate, who passed a resolution making sure we call the state tree a Christmas Tree, dangit. Get the important stuff out of the way first, I always say.

Sure, some folks get riled up (redundant? Can one get riled down?) when others try to slip a shot of Jesus into their eggnog. Hey, if you can't get riled at the holidays, when can you? I mean, really.

You know, not too long ago it was flipped. People were concerned about making sure Jesus was in everything at Christmas. I don't have this as point of fact, I just use the lyrics from the old chestnut (redundant? new chestnut, anyone?) Here Comes Santa Claus:

A nice fusion of Faith and Fancy, I think. We can only hope the kids are praying for World Peace, and not the Power Rangers Dino Thunder Battlized Arm Extender (which is what I'm shootin' for).

Later in the song, we learn that:

Peace on earth will come to all
It we just follow the light
So let's give thanks to the Lord above
That Santa Claus comes tonight!

We at SPASTIC have no problem with this tune. It's adorable. It is what it is. But can you imagine someone writing it today? Chances are slim it'd hit the Christmas Number One (go, Nizlopi, go!).

As the posts, like the Yule Log, dwindle down to nothing over the coming days, SPASTIC (remember them? I barely do) just wants to wish its 12 faithful readers a Happy Holiday. Which includes Christmas. And Hanukkah. And New Year's. And Kwanzaa. And probably others, but I don't think any of my readers celebrate them. But it's open-ended. Because I want you to be Happy.

And, thanks for coming around.
Now go put out those Communion Wafers and Milk for Santa.
Posted by Eric "Babe" Morse at 22.12.05 1 comment:

I'm rocking out to Neil Diamond's Christmas Album, one of the classics.
A friend points out the irony that Neil Diamond did a Christmas album.
Huh.
The Jewish Elvis sings O Come, O Come, Emmanuel.
Irony?
Maybe.
I guess it is.
Inifinitely more ironic than anything Alanis ever came up with.
So, there it is.
Rock on. [turns it to eleven]
Posted by Eric "Babe" Morse at 21.12.05 1 comment:

There'll be parties for hosting
Marshmallows for toasting
And caroling out in the snow
There'll be scary ghost stories
And tales of the glories of
Christmases long, long ago

This is a fun song to sing, and I like the sentiment. To many, this probably is the most wonderful time. Of course, this is akin to telling teens that high school is the Best Years of Their Lives: if this is true, then what do I have to look forward to?
Come Jan. 2, it's another 11 months of killin' time until the Most Wonderful Time rolls around again.

That's not really what I wanted to say about this song. First, this:

A great example of verbing, that. And it's much mistletoeing; alliteration, to boot. I've been trying to coin my own holiday verbing, but haven't gotten a good one, yet.

Somebody finally explained to me that this references A Christmas Carol.
Okay.
I guess Christmas Future is kind of scary, but a ghost story to me is one that ends with a farmer saying:
"my daughter? She died a year ago..."
Posted by Eric "Babe" Morse at 19.12.05 1 comment:

Lansing Teachers May Pare Their Raise


I don't often hear "pare" without "down". A googlefight between "pare exenses" and "pare down expenses" comes out almost a tie. "Pare costs" creams "pare down costs", so I may be in the minority, here. Pare by itself may be more common than I thought.

Which is good. Because as I think about it, "pare down" seems to be a redundancy; you can't "pare up".

The story talks about teachers being forced to make a choice: take a cut in your (already sad 2%, but at least we aren't working for Delphi) raise, or we lay off 20 or so of your colleagues. Man.

In conversation today, someone was talking about their experience in retail. It had to do with selling calendars, and a customer trying to "chew him down" on the price.

I had to stop him. Chew you down? Don't you mean Jew you down? And, by the way, where's your time machine, because you're comin' straight outta 1950.

He hadn't meant to be even vaguely anti-Semitic. In, fact, he was horrified to think that that he could be construed as such. Unaware of the connection, he had always thought his phrase was more literal: to chew away at (badger) someone until they gave you a better price.

I'd never heard "chew him down". I haven't heard "Jew down" in years.
Enter Google. "Chew him down" gives 250 hits. Quite small, and some of those actually refer to chewing (the dog had to chew him down to a manageable size). So, it's definitely not common usage. It may fit the category of malapropism... though a malapropism, I believe, is the use of the wrong word for your intended meaning. I doubt that most people saying "chew" really mean "Jew".

Here are a few uses:

"...the salesman will try talking to you in terms of monthly payments, but you need to switch him back to total price of the car in order to chew him down."

..."trying to chew him down to almost slave wages."

"I decided that I was going to just give him his asking price rather than try to chew him down."

Of course, "Jew him down" gets nearly as many hits, and most of those are talking about the phrase itself, not using it conversationally. This either means that the blogosphere is self-censoring, or that it's going away as a figure of speech.

Jokes I Remember From Junior High (4 of 4)

A lady comes down with a terrible rash over most of her body. She calls the doctor, and he tells her to take a bath in milk.
She calls the local dairy, and explains that she needs enough milk to fill her bathtub.
"Do you need it pasteurized?" the man on the other end asks.
Her reply: "No, I think up to my chin should be fine."
Posted by Eric "Babe" Morse at 14.12.05 No comments:

There's been much talk lately about the death penalty, and it gives us another look at Death Euphemisms.
Look at headlines covering the execution of Stanley Tookie Williams. The LA Daily News, CNN and San Jose Mercury News both say it in one, bold word: "Execution". For CNN.com, NPR, and MSNBC, he was "put to death".
One obviously sounds softer. "Put to death" sounds like something you do to an old dog. It almost sounds like "put to bed".
Most outlets lean toward Execution. I agree. There's nothing soft about death by injection.
Posted by Eric "Babe" Morse at 13.12.05 4 comments:

Posts I Only Have The Titles For

Sure, content is nice. Idea, first. Headline, later.
But I've got some great posts coming... I just don't know what they're about, yet.
But the headlines have already been written:

And Then There's Maude
It's Only Cheating If You Whistle
Arctic Genocide: The Legacy of North Pol Pot
Umlaut... Oprah... Oprah... Umlaut.
Pole Position for Prepositions
If Not Charlie Kauffman, Then Whom?
Is That Your Modifier Dangling, Or Are You Just Happy To See Me?
I Haven't Seen Saw
Cherry Pie Cover Not Warranted
Wait! Wait! Don't Smell Me!
The Year Of The Tat
Coleman Makes Imperfect Tense
That's My Interrogative
Torn Ligatures
Tuber Or Not Tuber
Posted by Eric "Babe" Morse at 12.12.05 3 comments:

From acoolkid, comes this interoffice email letting folks know about an update to an unfortunate acronym:

...ROPES, Version 10.0, the Remote Online Print System, was installed into Production CICS and batch, effective with the cycle of the CICS regions this morning, August 25. There are no significant changes to the product, but it will affect both batch and online...

His question: Where do they get the E?

Sometimes folks get a little liberal, borrowing two or three letters instead of one from some words in order to make a catchier acronym. But there's no E to be found betwixt the P and S. Huh.
So why not use ROPS, and just pronounce it "ropes"? Dunno. Are there other example of this startegy out there?
Posted by Eric "Babe" Morse at 8.12.05 3 comments:

Holiday Reflections (1 of a few)

You're spending a lot of time talking about a Christmas carol.
Yeah, well, it's what's on my mind. Sue me. And stop calling me Carol.


Do you sing along with O Holy Night? Man, now there's a song probably written by that O, Say Can You See? guy, with that one note that comes outta nowhere:

The Man With All The Toys

Just did my first of what will be many readings of 'Twas The Night Before Christmas. Each year, subversive thoughts find their way into my brain as I'm reading this poem. Here are three:

When I read "...threw up the sash" I picture the fellow retching and pulling a beauty queen sash out of his mouth. (actually, it's more often a merit badge sash. Former Boy Scout.)

When I read "...his face it was broad" I want to read it like Jimmy Cagney. It makes no sense, but there it is.

When I read "...filled all the stockings and then turned with a jerk..." I picture Santa standing at the chimney, but suddenly there's Steve Martin beside him, arrow through head, yelling "The new phone book is here!"

Anyone else have crazy images flash though their brain whilst trying to read something not meant to be crazy? Another example of this might be something a friend told me 20 years ago that has made it hard to keep a straight face in church over the years.
He told me that instead of "Lead On, O King Eternal" he sang "Lead On, O Kinky Turtle." So sophomoric, yet there I am, Sunday morning, visions of turtles dancing in my head. Tsk.

I'd much rather have sugar plums in my head. Or even Steve Martin.
Posted by Eric "Babe" Morse at 2.12.05 No comments:

I think since headlines tend to put verbs early, I read it proceeds.
Then got to the end... then had to go back to the beginning. The spoof paper is buying shoes? Oh. proceeds.
How about you? Anyone else get the same reading?
Is this confusion reason enough for the head to be rewritten, or should people figure it out?