The Wages of This Sin: Two Bucks

In Michigan, smokers pay $2.00 a pack in taxes for the privilege of standing out back in the rain. This tax hike passed over a year ago, mere weeks after it was soundly trounced as bad government. The story of its failure is here:

We'll just have to file that away for the next one.

Why do I do this? Just as I'm about to hit Publish, I think Hey. I wonder if anyone else could ever have come up with this bit of wit? Let's check! Google says 386 other web pages already came up with my headline. Dangit! I could've left well enough alone, deluded in the thought that my stream of consciousness had lapped over some unturned punnish pebble, but nope. I checked. I am officially, again, wholely unoriginal.

[update: "stream of consciousness" +"punnish pebble" gets zero hits. I am at turns pleased and unamazed.]

Can't seem to Publish yet. One more thought, as I was trying to pun my way through the post title:

A regional meeting of church leaders where they cast a controversial vote (gay clergy, for example) could have a snarky headline in a partisan paper that reads:

Putting the 'Sin' in Synod

Full disclosure: this may have subconsciously been inspired by the tagline in Bridget's blog.

More billboard reflections.
This one is an derivation of what I call Frag Tags: Fragmented taglines in a headline that work awfully hard to make their product seem hipper than it usually is. One example is the billboard that I still see daily advertising "Quality. Hometown. Care." Wal-Mart advertises "Good. Works."

I submit that these gimmicks rarely add anything more to the content. Well, periods, I suppose.
One I saw recently that I liked was:

That works for me. Another one I saw somewhere was:

I didn't really get that one, but it works.

Any-hoo. back to "Wellcome." I assume it's to be read as a Frag Tag:

It's for a health plan of some sort (the pic above's an artist's rendering, BTW... I'm still not stopping by woods on a snowy highway to snap pics), and they want me to know that if I use their plan, I'll be well. And I should come.

OK. For me, it doesn't add any more meaning than "quality care" does. Actually, it's more confusing. It sounds like something you'd say to a dog who doesn't get that you have a treat for him: Well? Come!

But what it does do is put a commonly misspelled word on a highway billboard in 4,000 point Times New Roman. "Wellcome" hasn't reached "Comming" proportions (still #1 five years running), but this 'board may make it a contender.
Yes, the misspelling is intentional... part of the charm of the ad, I suppose. That doesn't mean that many won't see it and subconsciously file away the new "Two Ls in 'Wellcome'" rule.

I believe in the First Amendment right to say or print what you wish. But I think there should be a fine for folks who contribute to American-youth-spelling-test-failure. Maybe for every intentional misspelling they create, they have to hand-grade 4,000 standardized English tests.

I got this warning message when installing software today. There is no Photoshop trickery involved.

Vanity of Vanities; All is Vanity

Hey, Mr. '05 Mustang Driver. You blew by me so dang fast I could barely make out your vanity plate:

Now, as humbly as possible, I'd like to say that I'm pretty darn good at figuring out vanity plates. I'm usually the first one in a group to shout it out. Now, now, no comments about the social life of a person who takes pride in being the best vanity-plate-figure-outer. Stay on topic, Vanity Plate Man. This is about you, not me. Your plate left me STR8UP stumped.
IMHO, vanity plates are MENT2B understood. An inside joke plate is a waste of money. Vanity plates are all about others' recognition of your wit and good humour:

So, back to you.
MRLDCTY.
Mr. Lead City? This is my best shot. But I can't figure this out. It's a Michigan plate... We're not a big lead producer, as far as I know. Judging by the speed at which you passed me, you have a Lead Foot, but are speeders referred to as being from "Lead City"? Not that I know of.
Is your name Merle? You didn't look like a Merle. Not to pigeonhole you or anything. Besides, I still don't make anything of it. Merle D. City?
Meryl? A Meryl Streep fan, perhaps? And your plate references the state of being that comes about on the eve of a new Streep movie... Meryldicity?

No, Cool Car Guy, I can't get it. Therefore, I dub thine plate whack.
The truth hurts, my man. Pick yourself up, get to the DMV, and take a Vanity Plate Mulligan. My suggestion:

Mere months after Pimp Dose, we've got another vandal in the school.
His tag:

It's written in red sharpie on lockers, in the stairwell, on railings.
This may be the work of a group. There's a chance they're a new gang, marking their territory with graffiti. While it's easier to read than typical gang tags, it's just as confusing. There is no punctauation to help us.

Is this a triumphant announcement of his/their manhood? (Penis!)
Is it shock at a recent discovery? (Penis?!)

Or is it, as I'm hoping, the start of a campaign?
Much like the billboards that post a series of teasers before the entire ad appears, I think "penis" will soon have a "The" in front of it:

A few days later, the rest of the text will follow:

The
penis
mightier than
the sword. 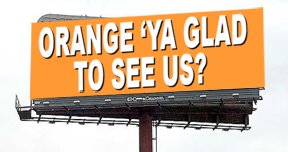 This billboard greets me on the way to work every day. Actually, this is my Photoshopped rendering of it, since I'm not wont to stop on the freeway and take a picture. What interests me is the deliberation in the art department of where to place that two-foot high apostrophe:

...no, "ya" isn't a word. it's an abbreviation of "you."
Yeah, but what letter are you replacing with the apostrophe?
What are you talking about?! The apostrophe is there to show people that we know we're using nonstandard English!
What, is that from Strunk & White: The Lost Elements? You're making up usage!
Dude, just put in the apostrophe.
Fine. Where does it go?
Just put it where it makes sense...

Maybe because we put one in "y'all", they thought we needed one here. Of course, then we'd have:

ORANGE Y'A GLAD TO SEE US?

Which just looks silly.
If Ya, sans punctuation, is good enough for Outkast, it should be good enough for Adams Outdoor Advertising.
Posted by Eric "Babe" Morse at 14.11.05 4 comments:

Ah, The Darkness.
The boys who gave us lyrics like:

are back with a new single.

One Way Ticket To Hell... And Back

The thing about The Darkness is this: you're never quite sure if it's a joke. I think that's why I find them so appealing.

Either way, this song rocks. Even if I hadn't heard it, I'd love it from the title alone: a one-way round trip, baby.
It makes absolutely no sense.
And therein lies the beauty. Even deciphering the lyrics about highs and lows of cocaine abuse really sheds no more light.

Here's a partial transcript from a commercial that plays on my radio at times:

...This is [radio personality]. You've heard me talk about my cats and how much they love Purina, as well as myself...

Whoa. The first time I heard it, I was sure I'd heard incorrectly. This could not be what it said. The next time, I wrote it down, in awe.

To me, the most literal reading of her message is:

I'm [radio personality]. You've heard me tell you how much my cats love [Purina cat food and] me.

But, this isn't what she means, is it? She means to tell us that both she and her cats love Purina. Something like:

This is [radio personality]. You've heard me talk about how much my cats and I love Purina.

Now, this does bring to mind a radio host sitting down at the breakfast table with her coffee and a bowl of dry cat food. And, maybe that's why it isn't worded this way... someone thought it sounded weird. We need a rewrite from the ground up.

The problem, here, again, is this:

Aren't there people who proof these things? Even after it's aired, doesn't someone hear it and go "Uh, guys? Yeah, [radio personality]'s on the radio saying her cats love her. It just sounds weird. And she's using reflexive pronouns instead of standard personal pronouns. Can we get a rewrite?"

And the answer, again, comes back.

The news this morning had a story about a family that moved back into its flooded home in New Orleans to find it had been invaded by water moccasins. Every time they opened a door or moved a piece of furniture, a snake slithered out to greet them.

After this piece, the anchor threw to the weatherman with this:


"...Luckily, nothing like that weatherwise is going to bug us today..."


Yes, luckily there are no poisonous snakes in the weather today. And luckily, today we will not have to return to a destroyed home after over a month away. Boy, it sure would suck to be them! Haha! Luckily, it's going to be nearly 70 today!

Do we really need a segue? In TV Anchorman School, it must be drilled into young recruits, because this is only a small example of something that happens every day. In local news, especially, but the Bigs do it, too. I would like the weather, thank you, but I'm not terribly concerned that it somehow ties to the previous story.

Just tell me that it's time for the weather.

The Remains Of The Day

When does a body become a remain?

Today, I have heard various reports, some talking about Rosa Parks' body, others about her remains.

AP:
"The Senate approved a resolution Thursday allowing her remains to lie in honor in the Rotunda..."

MSNBC:
"When they learned Friday night that Parks’ body would lie in honor in the Capitol, Cunningham’s wife said, “We have to go.”"

Many skip the distinction, saying simply that she will "lie in honor."

Is there a distinction? To me, remains suggests ashes, or something more gruesome. I must be off here, though, since it seems a fairly common way to refer to the body of one who has passed.

Hoping someone else will do the research, I wonder if it has to do with bodies that are not immediately buried, but are on view for a period.

Finally, as I got into this post I realized it might seem inappropriate. I do not mean to diminish the legacy of a civil rights pioneer by quibbling semantics. This is simply a straight question of usage that had never occurred to me before today.
Posted by Eric "Babe" Morse at 1.11.05 2 comments: